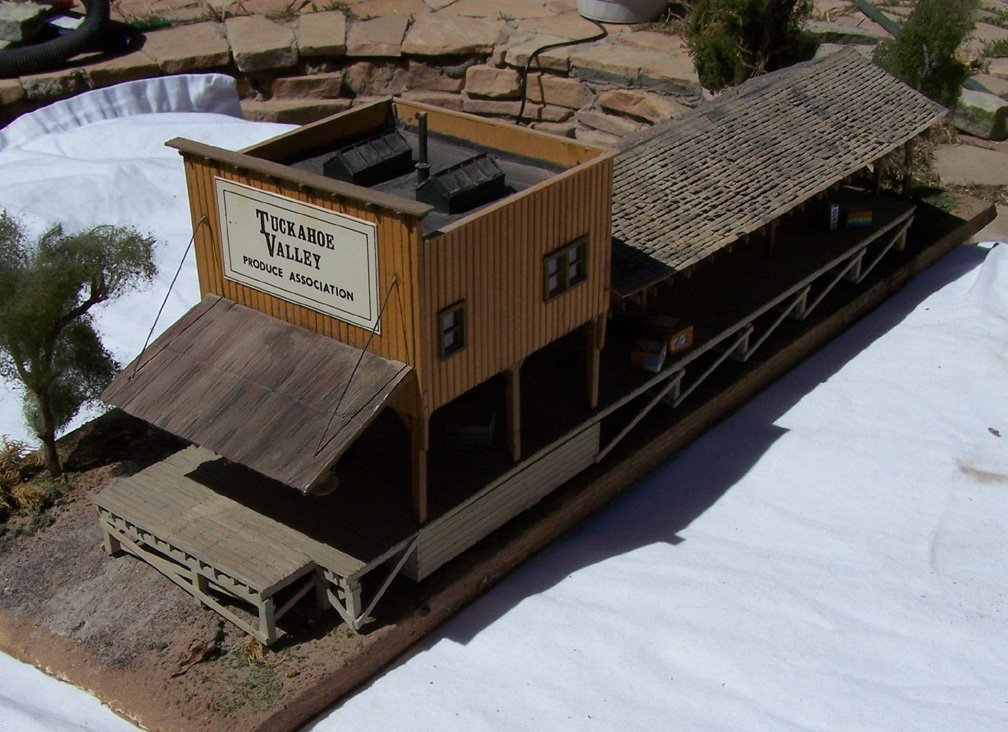 I just had to build a Campbell Scale Models produce shed several years ago. This is how it fits on the layout as if it could be used for receiving loads from a box car such as the one seen here. The loading platform is long enough to place three box cars for unloading. There was a situation in Minneapolis were forty box cars could be unloaded at the Farmers Market East of Lyndale Avenue and North of Glendale Avenue. I don’t think anyone would model that as thirty five feet of layout would be required. Just for the heck of it, I’m going to give the conductor of this train the job of unloading three cars of boxes from box car to the platform without knocking anything over. I’ll be nice, there will only be a few boxes per car. Will he know enough to open those box car doors at some point before the train arrives there?

The produce shed was carefully positioned near the track using the NMRA gauge which is real close to the boxcars. The ballast had to be chipped away so the platform would be in the same plane as the boxcar floors. I used the brush to push the freight unto the dock from the other opened door without a problem. What helped the transfer is to keep the loading dock slightly lower than the car floors.

The Campbell Scale Models L.C.L. Freight House kit came with wood blocks and barrels. The instruction sheet has sign cut outs to place on them for detail. I made photo copies to be used on my homemade boxes and crates. Everything on the platform could easily be used as live load transfers for that way freight.

To meet N.M.R.A. standards, their gauge was used to position the loading dock for height and distance to met their clearance standards. I moved the dock a couple whiskers lower and away to minimize the chance of engines and rolling stock from striking it.