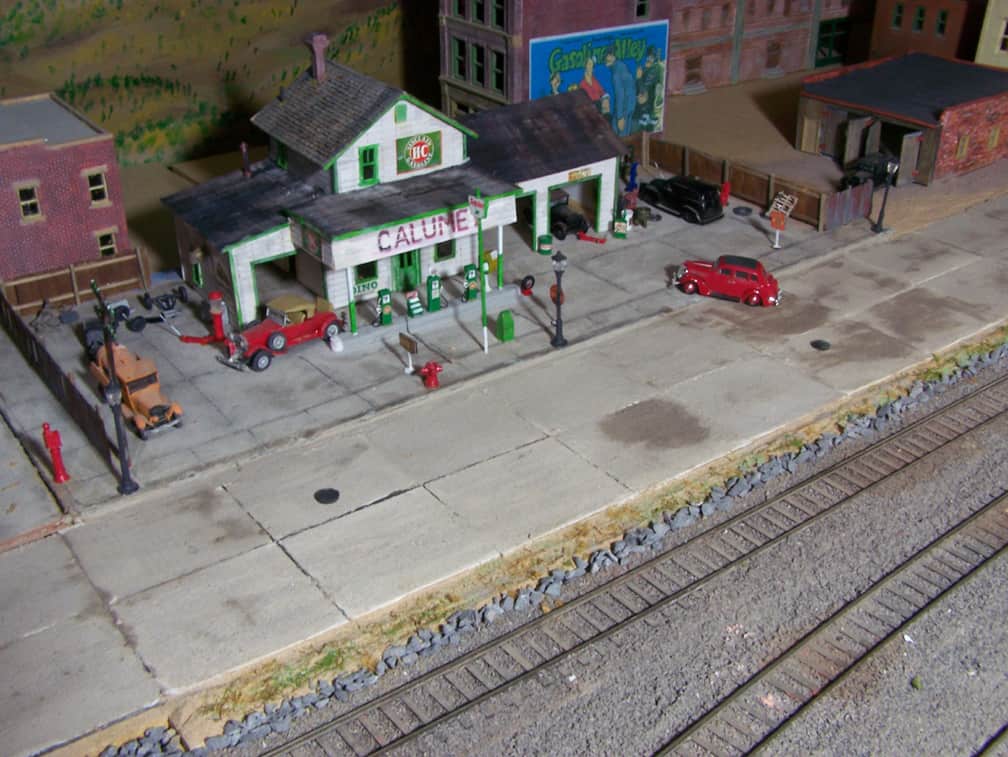 I don’t believe this was ever a Fine Scale Miniature kit that George built for his layout. You can see what I’m talking about by referring to page 33 in George’s book about his Franklin & South Manchester Railroad. The station also reappears on page 63 in the November Model Railroader. His has red trim and I went with the Sinclair green. I have about $40.00 in the scene that is mostly the cost of the detail parts. We had 10 service stations in Calumet and I worked at one as a teenager and hung out at several others in town. This was made to go with my Gasoline Alley scene next door as that garage is at right. Caserio’s owned the Sinclair bulk plant and service station next to the railroad tracks on West Pine Street in Calumet. My friends parents owned a Sinclair Station a few blocks away on East Pine Street. Mine is just called the “Calumet” station. Every layout needs a close up action spot in every town, so this is the model chosen for the purpose here.

Street and sidewalk curbs have been touched up with #1290 Concrete Paving material. A row of #1155 Basalt Rip/Rap rock was placed between the street and railroad right of way. The now painted cast metal details are; windshield wiper display cabinet, tire changer, battery charger, four shelve cabinet, 10 ton press, work bench (wood), air powered grease pump on barrel, wheel balancer and bearing packer. Other service station equipment is in the scene also. It’s never winter on this part of the layout so vehicles can be worked on outside year around.