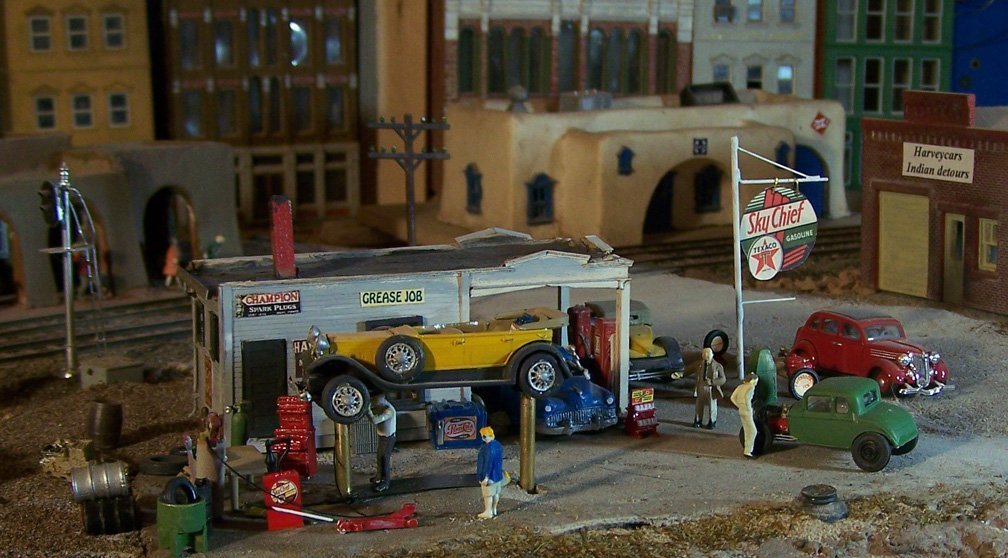 Ours is a Harvey Lunch Room along the mainline and a great place to grab a chair and cup of coffee to watch trains. The railroad financed the construction of the Harvey Co. facilities and the agreement allowed all Santa Fe employees a discount on meals. Our trains frequently stop at such places so the crews can catch a bite to eat and a cup of coffee. There is also a “News Stand” to grab a magazine or newspaper. My interest favors automotive stuff so I place more importance on the servicing of the old Packard Harvey Cars you see in the foreground scenery. I spent 17 years working on the latter-day Harvey Cars when living at the Grand Canyon before moving to Paulden Arizona.

To start with, the area on this side of the tracks has acres of space ( 10 “) with an up-front scene for a gas station. It’s a kit I built thirty years ago, and it found a new home. The service station does some of the service work on the Fred Harvey “Harvey Cars” used for the “Indian Detours” motor trips in the Southwest. The building across the street is the Harvey Car garage.

A Weaver Twin Post hoist was scratch built from brass and can be raised or lowered. I had one of these hoists (Weaver) in my shop as a car or light truck could have easy repair access for the transmission and driveline. The front hoist cylinder slides fore and aft on a track so it can be adjusted to fit the length of each car. The signpost was done likewise from brass. The perimeters of the street and driveway were made with concrete (#1290 Powder) curbs, gas station driveway, and work area slabs.

The road crosses the tracks with the crossing protected with grade crossing flashers from Oregon Rail and a detector from Circitron because I like the action.

When modeling a full-service gas station, How many folks forget to install the bell ringer hose across the pump island?

In Arizona, we do some service work outside as the sun shines most of the year and it seldom rains. We wear a glove in the summer because the tools laying in the sun get so hot you can’t touch them. JL Innovative makes several details that pick up the action for this scene. My policy is building at least one Jordan vehicle for every new scene. The green 32 Ford 5 window Hot Rod coupe was the kit selected this time. You’ll see these same vehicles in different scenes. After all, don’t your people drive from place to place on your layout?

A few extra details were added in this lower picture

The Fred Harvey lunch room (the arched structure) just received a coat of lighter paint and is now complete except for some signs. The Santa Fe depot and freight house in the upper picture is finished except for detailed junk and people. The depot was inspired by the one in Winslow Arizona and is still served by Amtrak.

The next project is to work about a 2-foot area to the right of this scene with, “again”, most of the detail upfront.

The same pigments I use for scenery and used for weathering all the structures you have seen on this web-site have now been applied on these freight cars. Call this “The Art of Model Railroading” as I wanted to make my weathering very obvious. Someone made a statement recently on the internet that Athearn’s rolling stock is not selling anymore and gathering dust on the hobby shop shelves. Consider using them for these extreme weathering techniques and I’m sure they will get as much attention as those highly detailed ones at six times the money.

That freight isn’t ready to leave until the conductor turns on the marker lights.
I bought an old caboose with a bay window. I place a toggle switch that powers the L.E.D. marker lights and a 3-volt interior bulb. Stay away from those slide switches as they can be unreliable. A toy train becomes more interesting when lighted for “after dark” operations. The caboose typically sets square on the rails, but I tipped it slightly for the picture.

All caboose or specially marked freight cars have Logic Rail Technologies detectable wheelsets to activate the red block signal if left on the mainline while switching cars at a siding.

That 16 car freight emphasizes that my yard has a bowl to keep cars from rolling out on the mainline. The camera also exaggerates the kink in the yard tracks at left.

Before that train leaves, have the conductor turn on the lights to simulate a “get ready” action for train movements. In this situation, how about a train is approaching from the rear, that’s why they have marker lights.

Using photos for a cartoon strip require close ups that keep everything in focus. Flaws in the model work now show up dramatically such as the unpainted wagon spokes, shiny cloths and the right shoulder of the man not glued in place properly.

To make the characters larger in the picture box, you need to crop them out before you reduce the picture size. Now the flaws in the man really stand out.

You now need to decide if the overall scene will be of interest to the readers even though the characters are small and without action. Traditionally, cartoons are about the characters and the artist draws them bigger in the frame to show features and action.

Notice the expression and body language of Walt in my drawing. I need to find a way of drawing my characters and overlaying them on my photos for many of the frames. Just drawing the characters would save a lot of time when using existing scenery for a cartoon.

The model railroad industry has gone in almost complete denial that thousands of us still run with DC throttles. An exception is MRC with its various transistor power packs. They also make a walk around a unit called the CM20 of which I have for my mainline cab and could now use a second one. This is ideal for staying with your train where ever it is around the layout. This system allows you to unplug the handheld unit and move it to another telephone jack where ever you installed them around the layout. The train continues at the same speed while unplugged. For my yard, I don’t need that elaborate of a system that costs about $200.00 for a local control throttle. To save time, I would have purchased a simple handheld transistor unit, but no one makes them anymore. The commercial ones I used in the past have all burned out so they’re in the dumpster. The picture of the home built one you see below was built 33 years ago and it still works fine. It consists of three components. An 18-volt power supply, a filtered DC circuit on a perf board, and the simple transistor throttle itself. If you know nothing about electronics, find the book below and you will be able to master what I call “Caveman” electronics. I purchased the second printing of this book in 1975 and the author did well by assuming the reader knows nothing about electricity. I have built many projects from the book and got them to work even thou I had to substitute some components. Now that my second throttle works, plans are underway to build a high powered walk around the mainline controller.

10 OZ. OF DRY ROCK POWDER THAT IS MIXED WITH WHITE OR CARPENTERS GLUE AND WATER to THE CONSISTENCY OF TOOTHPASTE.
Spread it out with a bread knife and/or palate knife just like a real concrete finisher would.

Breaking away from that sterile plastic look for streets and sidewalks
This three-building set came in from Downtown Deco last month and I started putting it together lately. An extra plastic building was placed into the scene so there could be an alley in the middle of the block. The street and sidewalks are in place with my #1290 Concrete Paving material. This is my first attempt at having a track in a paved street.

1/8″ Foam core was used for the sidewalk and thin cardboard for the base between the rails. Our paving material powder is mixed into glue (carpenters) and water to a consistency of toothpaste.

The creative part is adding details like the original brick street exposed through the broken pavement.

A similar theme of streets and sidewalks will carry through with the new block of buildings. This requires a jog in the streets that adds interest to the scene. Notice that the scenery is at an angle to the wall and bench work to keep the viewer’s eye from following those straight lines.

The street traffic can keep flowing with this half-block jog worked into the narrow limitations of bench work.

The area at left will be transformed into a representation of my favourite junkyard on Water Works Street.